Buddhism is a more than 2500-year-old non-theistic view and is one of the main world religions. Buddhism is a doctrine of methods which are based on developing wisdom and compassion for all sentient beings. It was first realized and then taught by Buddha Shakyamuni, who was born as a prince and renounced the royal life to become a wandering monk and ascetic, as the path to complete liberation from the cycle of suffering and existence. Buddha Shakyamuni is an example for a human being that has perfectly fulfilled the capabilities of the mind and therefore could teach the path of liberation based on his own experience.

According to the realization of the Buddha all beings want to be happy but they do not know what the causes of permanent happiness are. Therefore the teachings include many methods to develop wisdom, which recognizes and dispels ignorance. This process leads to the realization of ones own true nature and to the final liberation from the circle of suffering. The Buddha was teaching that it is in our hands to realize our true nature and to walk the path of liberation. 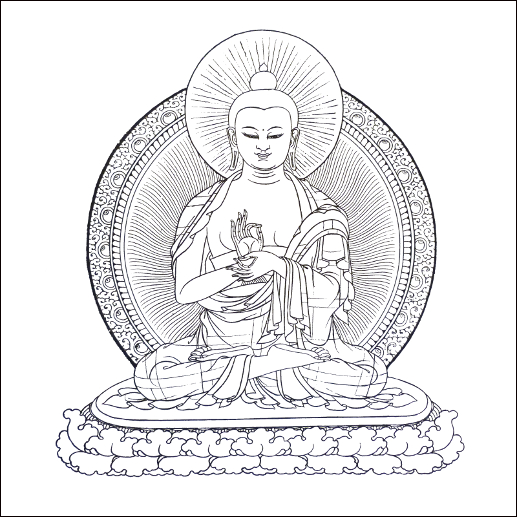 Around 2500 years ago the historical Buddha was born the prince Siddhartha Gotama in a kingdom at the foot of the Himalayas. It has been prophesied that in his life he either will become a successful political ruler or an ascetic. While growing up in the luxury of the palace he was cushioned against reality. After finally encountering old age, sickness and death he recognized the impermanent nature of all things and decided to escape from the palace and become a wandering monk and ascetic. After several years of asceticism he realized that this rigid practice does not lead to liberation. Consequently he started to eat regularly and after extensive meditation he finally attained enlightenment sitting under a fig tree a site, which is today called Bodh Gaya. Subsequently he taught for more than 40 years, instructing a large number of ordained and lay followers. Eventually Buddha Shakyamuni died at the age of 80.