The History of the Buddhist Community Karma Tengyal Ling in brief

In the seventies of the last century people in Berlin and other German cities met to learn meditations of the Tibetan Buddhist traditions. Many famous teachers were invited to teach. Thus in 1977, the head of the Karma Kagyu School, the 16th Karmapa, arrived in West Berlin. Already in 1976 he had delivered the name “Karma Tengyal Ling” to the center in Berlin (“Karma” here means Buddha activity, “Ten” teach, “Gyal” victorious and “Ling” island or place). On the occasion of this visit he initiated the establishment of the institution “Karma Tengyal Ling”. In 1984, the association of the same name was founded with the aim of creating a suitable place for the transmission of the entire Buddhist teaching and especially the methods of the Karma Kagyu tradition. Initially, a shop was rented in Berlin, in which a provisional shrine room with various Buddha statues, texts, ritual objects and musical instruments, a small library, a tea room and an office was built. In 1992, a suitable property was bought in Stechlin-Menz, OT Ludwigshorst. 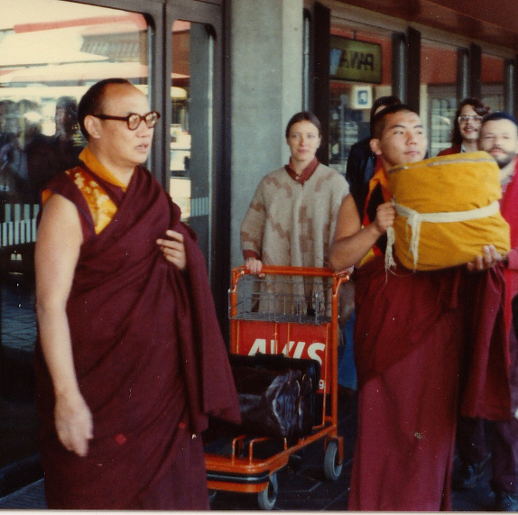 The Commonality of Human Beings

Prior to his first journey to Europe in May 2014, the 17th Karmapa Ogyen Trinley Dorje expressed his aspiration that he could continue the work begun by his predecessor, the 16th Karmapa, Rangjung Rigpe Dorje. On Friday, during his second journey to Europe, the Karmapa was finally able to visit a Karma Kagyu Buddhist centre 70 km northwest of Berlin, Karma Tengyal Ling, which was given its name by the 16th Karmapa in 1977. The Karmapa, who first heard of the centre while he was still a young boy in Tibet, spent several hours there.

He first visited members and supporters in the shrine room and then had a tour of the site before enjoying a specially prepared lunch. There was a humorous moment when he mounted the throne and, because of the lower ceiling, his head touched the frieze parasol. The Karmapa laughed, sat down and began to lead the prayers. Horst Brumm, the director and founder of Karma Tengyal Ling, welcomed him and formally offered him the centre. “This is yours and we will do what you wish us to do,” Horst declared. “We have been waiting for you to come to take this place.” In turn, His Holiness presented Karma Tengyal Ling with a signed thangka of Shakyamuni Buddha. (Editorial note: the founder of the center was not Horst Brumm, but H.H. the 16th Karmapa)

During the tea and sweet rice ceremony which followed, the Karmapa talked and joked with those around him. He enquired about the local wildlife and was told that there were deer, wild boar, rabbits, hawks, cranes and lots of mice. He also asked about the drone that had been flying above the centre when he arrived. Later, he amazed everyone by flying the drone himself and skilfully manoeuvring it over the trees and buildings before expertly bringing it in to land.

In a short address to members and supporters of the centre, His Holiness spoke unreservedly of his confidence that because, “the 16th Karmapa gave the name for this centre with his utmost best intentions… this will be a place where the Dharma will flourish.”

He also commended Horst Brumm and Brigitte Koenig for their commitment to the centre for over more than thirty years. “The place reminds me so much of Tibet,” he said, “and I wish to give my heartfelt thanks to the two people who have been taking care of the place in spite of so many difficulties, with others, for so many years. It is my aspiration that we will be able to greatly improve and develop this centre into something great… so that we can do a lot of good things here.” 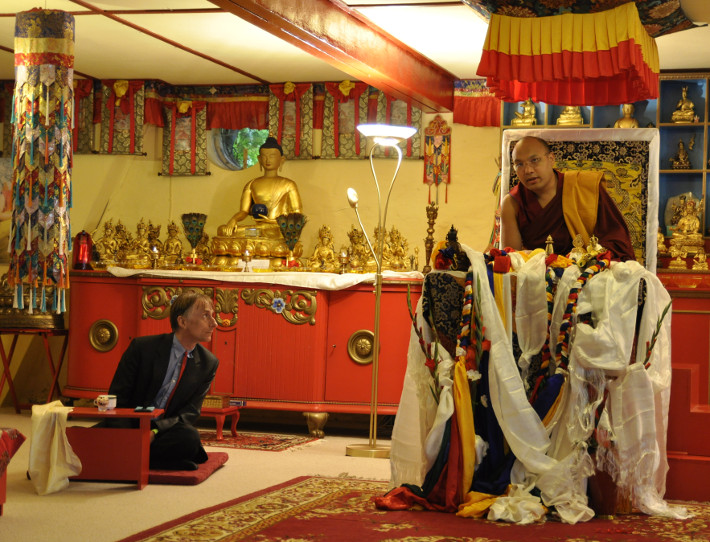 The Karmapa went on a selective tour of the central part of the site where the proposed new centre will be built: round the buildings, through a wooded area and across a huge freshly harvested field, through another wooded area, into the garden and finally into the house, which is slowly being refurbished. (Editorial note: In fact, Karma Tengyal Ling has acquired additional land and will occupy nearly 200 hectares eventually.)

After a special lunch, prepared by Tibetan caterers and volunteers, His Holiness returned to the shrine hall to meet the local people who had made it possible for Horst to buy the land and had supported the establishment of a Buddhist centre. (Editorial note: the land was not bought by Horst Brumm but by the association).

The Karmapa began, “The vision of the 16th Karmapa was for this entire region to experience peace and well-being. He wished for people here to live in harmony with each other.”

“While we are of different religious upbringing, and somewhat different cultural background, we still came together here in an atmosphere of agreement, friendship and harmony,” he observed, “and considering our many differences, this mutual affection carries even greater weight.” Because the 21st century is the ‘age of information’, there had been extensive sharing of knowledge about other people’s cultures and religious views. “I believe that now is the time and age where we all have the chance to get to know each other and learn to respect each other on a personal level,” the Karmapa continued. The crux of the matter, however, lies not in our differences but in our shared humanity.

“We are all different in many ways and aspects,” he acknowledged, “However, fundamentally, we are all the same: we all long for happiness and well-being, and we all want to avoid pain and suffering. On a basic level we are all simply human beings on this planet, and in this regard we are equal. We are all simply standing on the same common ground.” His Holiness continued, “I believe it is very important to remember this. In particular nowadays, when the world is beset with problems, with all sorts of conflicts, when many suffer and go through hard times, it seems even more urgent that we learn to co-operate. We need to work together on this very common ground, and engage in caring for and helping other living beings on this planet.”

His Holiness concluded by thanking the local people for their many years of support, help and encouragement for Karma Tengyal Ling, and then apologised, “I can’t talk much more right now. I must have eaten too much at lunch.” Everybody laughed and applauded. He then returned to the main house to discuss future plans with members of the board.

The history of the centre demonstrates an extraordinary coming together of causes and conditions as well as the perseverance and determination of those who had the vision of a Buddhist centre in Berlin.

The story began in 1976, when the 16th Karmapa wrote down the name ‘Karma Tengyal Ling’ for a future Buddhist centre in Berlin. One story tells how at that time he predicted that there would be a flourishing Dharma centre ‘in the German capital, Berlin’ only to be corrected because Bonn was the capital at that time. The following year,1977, while on a short visit to Berlin with the 3rd Jamgon Kongtrul Rinpoche, he handed the paper over to a small group of practitioners and left his dorje and bell as the seed for the centre to thrive. 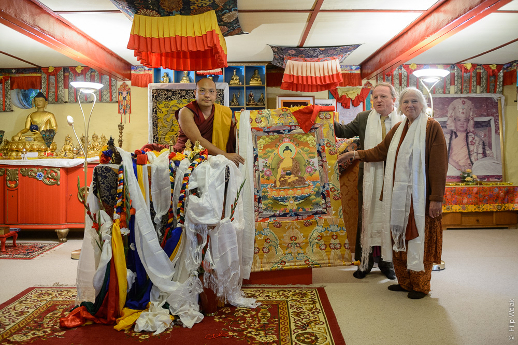 At that time members met in each other’s homes. However, in 1983 the group was able to move into rented rooms shared with a group of musicians on the fourth floor of a factory, and became the very first Tibetan Buddhist centre in Berlin. Brigitte Koenig, the second oldest member of the community, recalls, “It was very difficult to meditate to the sound of rock music!” In 1984, they were able to move into their own space, but it was only much later, after the reunification of Germany in 1989 when former East German government property went on the market at affordable prices, that they were able to buy land. The property where the centre now stands had once been a farm, but in 1945 it was converted into a holiday home for the children of factory workers. Consequently, there were already buildings on the land which could be used for accommodation and a shrine room. The land is part of a nature reserve and building permission would not normally be given, but the fact that buildings already existed made it easier. There were several prospective buyers for the land so the local villagers also had to be convinced that Buddhists would be appropriate owners. In 1992, the World Buddhist Congress was held in the former East Berlin. Suddenly, Buddhism became something accepted and respected across Germany, and the doubts of the local population were assuaged; the villagers welcomed the Buddhists onto the land. Since then, thanks to the dedication of Horst Brumm and Brigitte Koenig, the centre has been slowly taking shape.

(Editorial note: It was not "rock music" but Indonesian gamelan music.)

When the time came for the 17th Karmapa to leave, people lined the path to wave goodbye, and His Holiness’ car made its way to the dirt track leading two kilometres to the village of Menz. After the car had disappeared, everyone stood for a moment as if bereft, and then, as suddenly, they began to hug each other, laugh and many unashamedly wiped away tears of joy. The Karmapa had returned to his centre with great auspiciousness.