Already in the twenties of the 20th century, the “Buddhist House in Frohnau” was built. It is the oldest Buddhist building in Western Europe. Ethnologists, religious and linguist scholars encountered Buddhist teachings in the mid-nineteenth century. The impressive thing about this doctrine is, on the one hand, that this doctrine can not be proselytized according to our understanding and, on the other hand, that it is based on the principle of a method. The latter means that this teaching is based on experience and not faith.

The main essence of teaching is compassion and wisdom, not study and knowledge. The Buddha demanded from his followers that they should verify his statements through their own experience.

The sole purpose of the teaching is to give beings the opportunity to become free from the cycle of suffering. Hence he taught the truth of suffering known as the Four Noble Truths.

In our Western culture, there is no teaching or method designed to directly overcome the suffering and causes of suffering. For this reason, there have been repeated attempts to make this teaching accessible here in Central Europe. Individuals, again and agin had the condition to be able to fall back on this teaching. However, in order to make them permanently accessible to many, the endeavor to create places of permanent transmission for this doctrine arose in the seventies of the last century.

“The island of the victorious teachings of the Buddha”, which is also the name of the institute and the sponsoring association, has the foundation to become such a place. Already in 1977, the 16th Gyalwang Karmapa prophesied that near the capital Berlin, a special place for the teaching of the Buddha would emerge. Since at this time this was considered unlikely, the followers focused on Bonn, the provisional capital.

The holding of the 3rd Jamgon Kongtruls to the vision of his own teacher, the 16th Karmapa, led to the place in Stechlin OT Menz. Purely viewed from the perspective of the geomantic conditions this is the most suitable place for all Buddhist exercises. Such places are very rare to find.

Therefore, right after the fall of the Wall, the people in charge made efforts to obtain construction rights for a monastery and temple complex. This effort was rewarded with success.

Of the Germans, the 16th Karmapa said that they were like a sleeping bear regarding the application of the doctrine of liberation. Once they wake up, they would be unstoppable.

In the past, the people of Central Europe have often shown to what painful deeds it is capable. However, if it succeeds to align its actions more with the Buddhist viewpoint, it could also act very peaceful and healing.

This is the deep background for these activities. 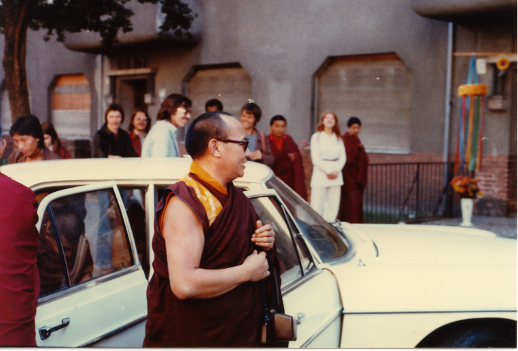