The head of the Karma-Kagyu-School is H.H. Gyalwa Karmapa. The first Karmapa Dusum Kyenpa was born in the year 1110. The tradition of the reincarnated teachers that sustain an unbroken lineage is based on him. Since that time the Karmapas normally leave a letter before they pass away, giving information such as time and location of their next incarnation. The letter of the 16th Karmapa contained a poetic, still very precise description of the place, the year of birth and even the names of his parents.

The main seat of the Karmapas is Tsurphu Monastery in Central Tibet. After the Chinese invasion H.H. the 16th Karmapa Rangjung Rigpe Dorje had to flee from Tibet in 1959. Since that time he resided in Rumtek Monastery in Sikkim/India.

In 1974, for the first time the 16th Karmapa traveled to the West and visited Europe, Canada and the United States. In 1977, Karmapa visited West Berlin. On the occasion of this visit, he initiated the establishment of the institution "Karma Tengyal Ling". At that time he predicted that a flourishing Dharma center would be "near the capital Berlin". After correcting the 16th Karmapa that at the time Bonn was the capital of Germany, the 16th Karmapa repeated that the Dharma Center will be built "near the capital Berlin". With the purchase of the property in Stechlin-Menz in 1992 this prediction was fulfilled.

In 1981 he died from cancer in an U.S. hospital. The present 17th Gyalwa Karmapa Ogyen Trinley Dorje was born in 1985 in East-Tibet as a child of a nomad family.

Already at his birth he showed that he is a special child. There were several wonderful phenomena, for example, the neighbors in the valley heard the music of shellfish horns, but could not find the origin anywhere. The child developed early special skills such as clairvoyance and a natural authority. He was educated in a monastery in the region and spent part of his time with his parents in the nomad camp. There he was found in 1992 by a delegation of Tsurphu Monastery based on the precise descriptions in the letter left by the 16th Karmapa. Thereafter he returned to his main seat in Tsurphu Monastery and was the first reincarnate lama that was accepted as a "Living Buddha" by the Chinese government. In the course of the years his living conditions in Tibet became increasingly difficult. Receiving teachings from the lineage-holders which is essential for the Karmapa to sustain an unbroken transmission and also being taught by other high teachers was not possible in Tibet. Given these facts he decided to leave Tibet and fled to India around New Year 1999/2000. There he now lives in Gyuto Monastery close to Dharamsala, the main seat of the Dalai Lama. 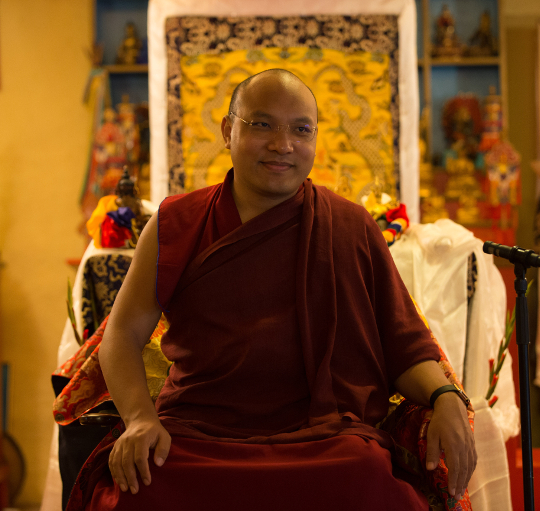